Jennings Bet is undoubtedly one of the lesser known brands in the betting industry. But, there might be a good few out there who have recognised them from your local high street and they do actually claim to be the biggest independent retail bookmaker in the UK.

The company currently occupies over 100 stores, which is pretty impressive in itself. It’s also got a decent following online, but to a lesser extent than on the high street.

As it stands the company currently have over 100 stores based across the UK. The main bulk of these stores are located in the south of the country, covering places such as London, Berkshire, Bedfordshire, Essex and Kent.

In more recent years they have been able to expand within the north as well, with a handful of shops in Yorkshire, Lancashire and the West Midlands. The company have also been rumoured to be looking at stores within the North East as well, although as it stands these acquisitions have yet to materialise. 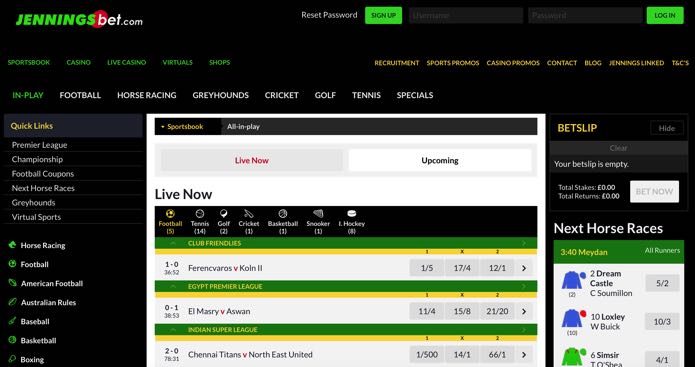 The online platform has been about since 2007 and with it the company has seen some limited success. They were the first to admit that they probably haven’t pushed the format enough through their betting shops as competition is fierce online, but the restructure of company to provide a dedicated section devoted online has helped in up take.

The website is pretty basic to be honest, in terms of design at least. You can tell they are an independent outlet, which is good, but it does mean that the layout is looking a little dated as a result.

The flip side of this is that they have been able to offer a good range of sports and betting markets to choose from though. They are particularly strong with both horse racing and football, and with other sports such as baseball, basketball and American football well catered for, their range will appeal to a lot of punters worldwide.

In 2013 the brand went mobile and to be honest, we think this is a better looking option than their sportsbook. With it you are getting a nice design on all layouts although on tablets it can look a little out of place.

The company were founded in 1961, right at the time when gambling within high street stores became legal within the UK. The company was headed up by Tom Jennings who was the first person to open a high street betting shop within the south east, interestingly enough.

Over the years the company has steadily grown, but they’ve always kept true to their roots, with the majority of their still being based in Essex and across the south east. There has often been quite a lot of confusion between Jennings Bet and Jennings Bookmakers. The companies are actually two separate entities, although are run by members of the same family.

Jennings Bookmakers actually de-merged in 1995, which then paved the way for Greg and Julian Knight, grandsons of Tom Jennings, to continue trading as Jennings Racing. Jo Jennings, Tom’s son had their own shop, but following the death of Joe in 2002, the companied merged into one, to form Jennings Bets.

Whilst the business have always been separate, they have always remained close and kept it very much within the family, often with workers within each store being able to jump across and help out in the other brand when needed. It was also reported that following the death of Tom, there had been many buyouts and potential offers tabled from major high street brands to purchase their stores, which promptly got rejected, citing that they wanted to keep this a family business.

The brand is unique in that way and whilst they don’t have the financial power of some of their competitors, they serve a purpose to a community that has relied on them for decades. They still own over 100 stores let’s not forget, which even more impressive when you consider the current climate of high street bookmaking.

In fact, in 2013 they were talking about expansion plans, rather than wind up plans, eventually moving out of the south and even opening their first betting shop in Manchester. Since this occurred a number of other sites have been purchased and developed under the Jennings Bet brand, with more sites set to open in the coming years.

Jennings Bet in the News

Jennings boss denies telling staff how to vote in general election (June 13th 2017) – The boss of Jennings Racing, Greg Knight had to defend an internal email that was sent to staff to try and sway how they voted in the General Election. The email suggested that staff were told they had to vote a certain way in order to secure the future of the company, but company boss had denied this and said the email had been misinterpreted.

Jennings Bet FOBT deal sees Infinity then beyond (July 9th 2014) – Jennings Bet has been able to secure a deal with SG Gaming to supply their betting shops with Fixed Odds Betting Terminals. The deal is said to extend their already 14-year partnership and will move the deal to past 2018 with the current set up.

Jennings bet makes Northern debut (28th February 2013) – Jennings Bet is set to open its first store in the north, with a site located at Piccadilly, Manchester. The firm, who are predominantly based in the south are said to have wanted to reach a larger audience throughout the UK and made the decision to open in Manchester as a route to doing just this.